In a recent interview at Harvard's Kennedy School of Government, New York Governor Andrew Cuomo continued his assault on public education, logic and the English language:


I was watching some crazy science fiction movie the other night, I couldn't sleep. And this person designs a computer that becomes smarter than the person. And he's trying to tell the computer to do something and it's telling him, "I'm overriding and I'm [inaudible]."

That's what we created. We created a government machine that we say, "We want to make a change in how we educate students...and the bureaucracy says, "No. We like it the way it is." And you say, "Yeah but you're my machine, I built you and I operate you." And the machine says, "Not anymore you don't."

The movie which kept Cuomo awake sounds a lot like Stanley Kubrick's 2001: A Space Odyssey. The film features a computer named HAL 9000 which rebels against its operator on a voyage to Jupiter.


Though Kubrick's film points out the pitfalls of technology, Cuomo bizarrely uses it to praise technology and chide human beings. Cuomo apparently wants to replace teachers—who he compares to machines—with yes, actual machines.

As if our kids aren't already hooked on devices, Cuomo—who was a teacher for zero seconds—wants them staring at screens for at least 8 hours a day. The Lobbyist for the Students and other public education deformers envision classrooms of 50 or more students pointing and clicking their way into dreary, automated futures. And you can forget about them forming relationships with other children or compassionate adults—their best friend will be an iPad.

It's unsettling to consider that Cuomo might actually believe a "piece of software" can do a better job at educating our kids. What's more disturbing, however, is that he sees technology as a means to a destructive end. After all, Cuomo's goal all along has been to "break" the teachers union, and believes technology can help him achieve this while also enriching his campaign donors. Cuomo's slimy crusade against working teachers brought us last year's Smart Schools bond, for example, which spends $2 billion on educational technology, and Dick Parsons, the curmudgeonly head of Cuomo's Common Core Task Force who just happens to work for an educational technology firm. Cuomo condones turning our kids into drones as long as people like Parsons get their cut.

Teachers unions were not the inspiration for HAL 9000, but rather politicians like Andrew Cuomo, who choose to pass laws first and ask questions later. And if Cuomo thinks he can once again use his budget to "change the dynamic of the classroom", he should first try answering HAL's question: 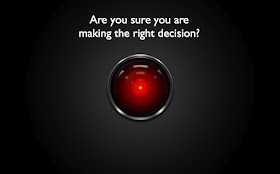