In an improvised interview from his mansion on New Year’s Eve, New York Governor and unabashed sociopath Andrew Cuomo bizarrely morphed into Campbell Brown, conflating and spewing the faults of his own teacher evaluation law (APPR) with the imaginary epidemic of perverted teachers:


“I understand the union’s issue; they don’t want anyone fired,” Cuomo said. “But we have teachers that have been found guilty of sexually abusing students who we can’t get out of the classroom.We have a process where literally it takes years and years to get a bad teacher out of the classroom. “


Perhaps the New York State Police should ask Cuomo exactly who these teachers are and where they can be arrested. Cuomo, the former attorney general who reportedly failed the bar exam four times, should understand that “guilty” sex offenders in New York are either in jail or have limited access to minors. If one were to actually slip through the cracks and become a certified teacher, the parole violation alone would blow a hole in our criminal justice system as wide as Cuomo's ego.

Not to mention the attention Regents Chancellor Merryl Tisch and former Commissioner of Education John King would receive for allowing the teacher in the classroom in the first place. Tisch would likely deflect blame under her breath while kicking King further under the bus on his way down to Arne Dunked-on in D.C.

Cuomo should also understand that a sex offender has a much better chance of getting a job in his prized privately-run, publicly-funded charter schools, since 30% of teachers in charters are not even required to possess a New York State teaching certificate. Both Cuomo and Tisch apparently want to make it more difficult only for those seeking jobs in unionized schools to make a career out of teaching.

Cuomo’s crusade to fire more teachers is fueled by both his donors’ desires for more charters and Cuomo’s own desire for revenge against New York State United Teachers (NYSUT) for not endorsing him in either of his gubernatorial campaigns.

Forced to postpone his State of the State speech due to the death of his father and former New York Governor Mario Cuomo—who coincidentally passed into eternity on his son’s double inauguration day—Cuomo has also rebranded himself on social media for his second term, taking the low road against the middle class as his father lay dying:

Teachers and their families request that when Cuomo further threatens their lives and livelihoods in his State of the State that he at least do so at the Empire State Plaza Convention Center and not in a series of Tweets.

Meanwhile, the Union has rightfully taken to the streets in response to Cuomo’s education malfeasance, rallying outside his mansion during his New Year’s open house and outside the Buffalo History Museum during his second inauguration of the day. Protesting teachers froze outside while Cuomo threatened their pensions inside.

Guests to the governor's mansion were randomly selected to kiss the Prince’s ring—and check the First Amendment at the door.

Cuomo’s slimy associates reportedly would only allow NYSUT members to speak to Cuomo if they first removed Union apparel, and tickets to the event devoted three paranoid sentences to warnings about photographs.

The Pen is Mightier than the Person was able to obtain an exclusive copy of Andy Cuomo’s Golden Ticket:


Cuomo’s fear of photography has as much to do with trashing the rights of his constituents as it does his fear of saying something stupid, which he achieved anyway with his remarks about perverted teachers.

On the other hand, Cuomo’s inflammatory and ignorant Tweet about teachers’ pensions was not spontaneous but rather written into his inaugural address.

A rebuttal of this canard, however, should be obvious to all: 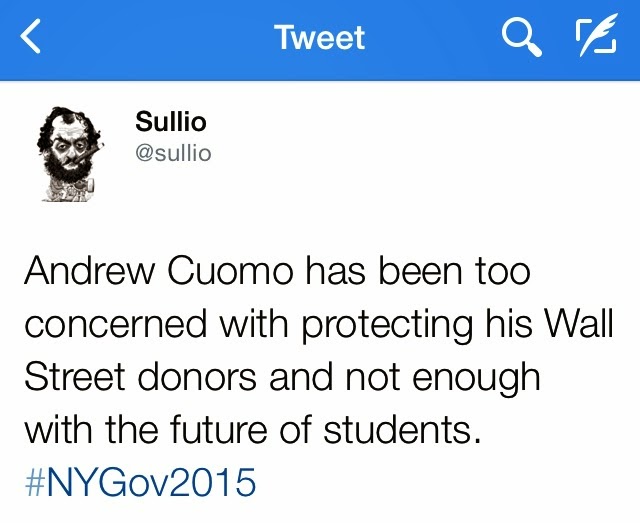 As NYSUT prepares to rally at the governor's State of the State on January 21, members should frame his insidious words within those of his late father, who, in surreal contrast to his son, actually loved and respected teachers. (He married one, after all)


The elder Cuomo’s sentiments cannot but resonate through the halls of Albany and the minds of all New Yorkers:

And while we urge the Lobbyist for the Students to also remember his father’s words, those who paid attention in English class already know how this vengeful tale will unfold…