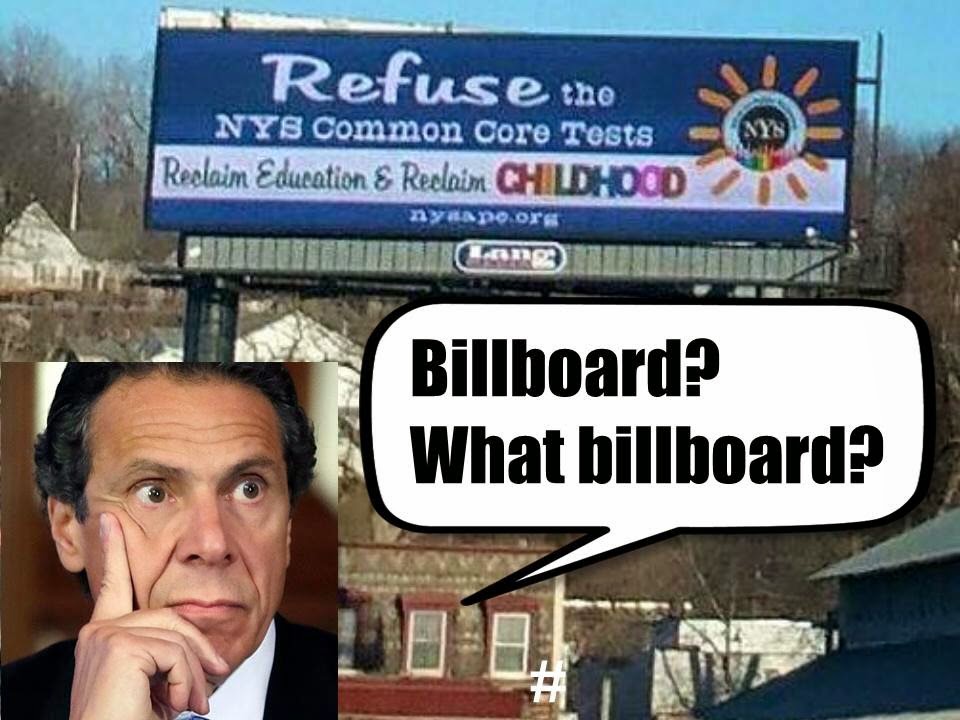 In the midst of a maniacal quest to conquer his “opponents” in the state’s teachers union (NYSUT), New York Governor Andrew Cuomo may have single-handedly quadrupled the number of children who will Refuse to take federally mandated Common Core tests this month. Cuomo forgot that many teachers are also parents, and can easily smell the shite of a teacher evaluation plan that will further subject their children and communities to the will of flawed tests designed by profit-hungry corporations.

Though the Lobbyist for the Students acknowledges his plan will amp up anxiety in schools, he doesn’t care. Instead, he repeats the mantra of his corporate masters, who want their piece of a public education system the governor calls a “$50 billion industry.”


Cuomo seemingly came under the spell of Bill Gates recently in telling us what this is really all about:

“We have all new technology, new systems that we can bring to bear for education, and that’s what this is all about.”
Andrew Cuomo
April 1, 2015


As if New York’s schools aren't dry enough, Cuomo also envisions tying their funding to the quality of their teachers (according to his evaluation plan, of course). The day may soon arrive, for example, when a fourth-grader’s panic attack during a Cuomo Core test could contribute to her bus breaking down on the way to her dilapidated school.

It is an affront to American democracy and collective intelligence when an ignorant asshole like Andrew Cuomo gets to decide so much for so many.
Cuomo said he was “celebrating late into the night” upon passage of his Inopportunity Agenda, a budget that simultaneously erodes the due process rights of middle-class workers and gives yacht owners a tax break.

Greed fuels the flame of hubris, however, and Cuomo’s actions, to the exasperation of education deformers everywhere, have only caused a simmering Opt-Out movement in New York to explode.

With lives and livelihoods threatened by toxic tests, New Yorkers have no choice but to fight back.


Fight back against a governor and legislature who call our children and teachers failures, but wouldn’t know the difference between a piece of chalk and a suppository.
Fight back against Big Media; share this blog post with someone.

Fight back and refuse the tests.