Just how much money did New York Governor Andrew Cuomo accept from a giant media company?

News Corporation CEO and Walking Dead extra Rupert Murdoch must know, since the crustaceous oligarch reportedly paid Cuomo $700,000 to publish a book read by less people than this blog.

Curiously, Murdoch and his Fox News Channel have also been kind to the governor’s live-in girlfriend, smiling TV chef Sandra Lee. Lee’s frequent appearances on Fox and Friends—semi-homemade advertising time for her books and brand—are also brought to you by News Corporation. Cuomo likely has less indigestion these days with Fox Cash lining the cupboards of the Mount Kisco mansion he shares with Lee.


What exactly has Murdoch received from the state in return for his kindness to Cuomo and Lee?

One of Cuomo's first acts as governor was to exempt News Corporation subsidiary HarperCollins from sales tax for e-books and online-only publications. While HarperCollins made $53 million in profits last year, the move has cost New York State at least $35 million a year since 2011, with the proportion of books now sold through small, independent book stores at less than ten percent nationwide.

Sadly, Murdoch’s money controls the media and many minds.

Speaking of minds, public schools in New York are due a lot more than $420 million, but Cuomo thinks this amount is better invested in Murdoch and tax breaks for the movie industry. Though box-office bombs like Fox’s Won't Back Down are optional nightmares for movie goers, insolvent school districts are not an option for parents, students and teachers throughout the state, thousands of whom have turned out at forums in recent weeks to tell Cuomo that they won't back down against his insidious need to annihilate their schools.

Cuomo’s palms itch around billionaires, but curl into fists near kids. Withholding billions from their schools is no way for Cuomo to cement his self-created legacy as the Lobbyist for the Students, and neither is stripping teachers of their due process rights.  Besides, every principal knows that bad teachers usually fire themselves before submitting to the taunts of unruly students year after year. Those who do otherwise and still spend the majority of their adult lives helping other people’s kids are most often called former teachers.

Of course, Cuomo’s war on union members is red meat for Murdoch and Fox, with the governor one Koch brother donation shy of sharing a ticket with Wisconsin Governor Scott Walker in 2016. Walker stood up for Murdoch recently when he promised to protect the elderly Aussie from ISIS, just like he protected other billionaire assholes from union members soon after assuming office.


Walker stopped short of calling the brave unionists who stormed the Twin Towers on 9/11 terrorists, however. At least some middle-class workers are off limits these days.

With their governor seeking to subsume public schools on behalf of his benefactors and pass ethics reforms aimed at his enemies only, New Yorkers have no choice but to resist Cuomo's reforms and refuse his tests. Though it's looking more likely by the day, they cannot wait for the U.S. Attorney to cart Cuomo away in cuffs; civil disobedience is a more direct path to democracy anyway.

Let Andy and Sandy know they are not your friends. 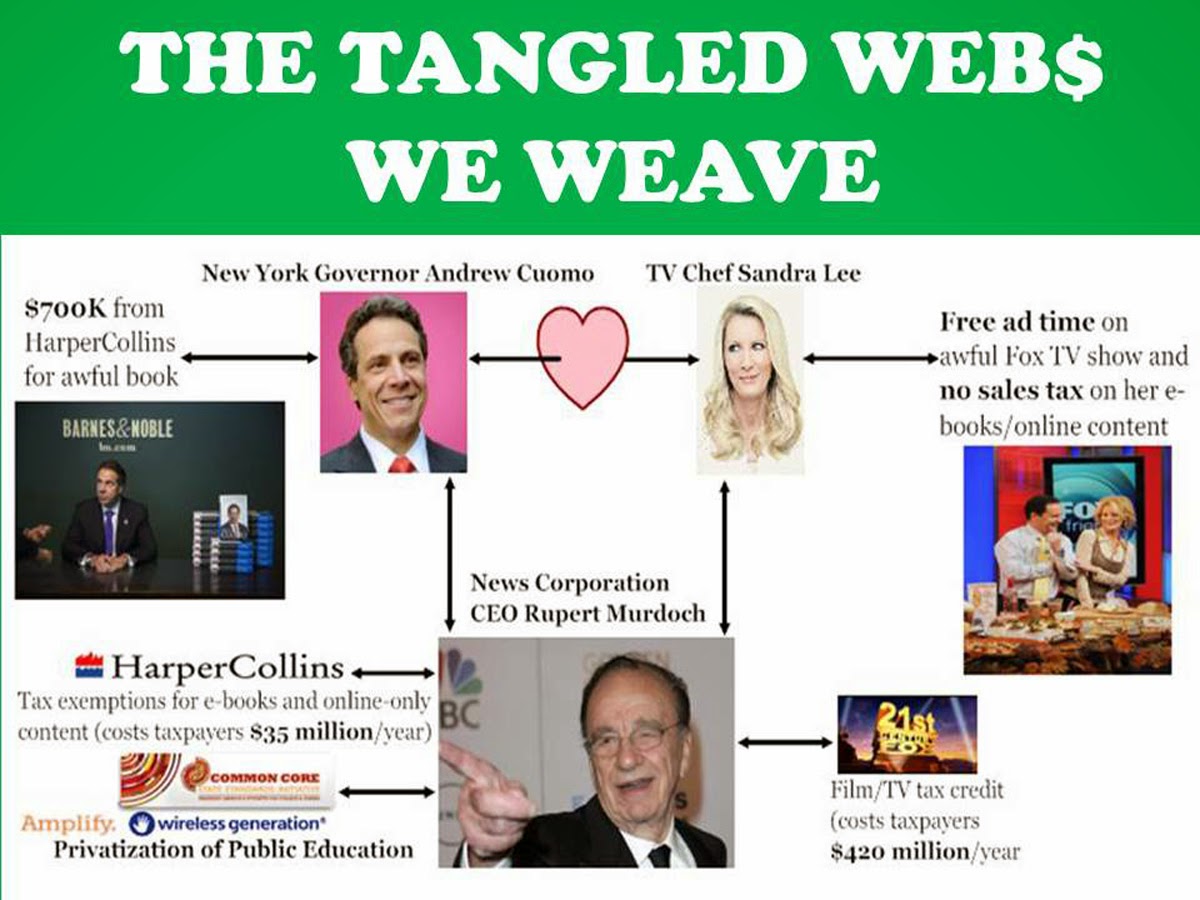 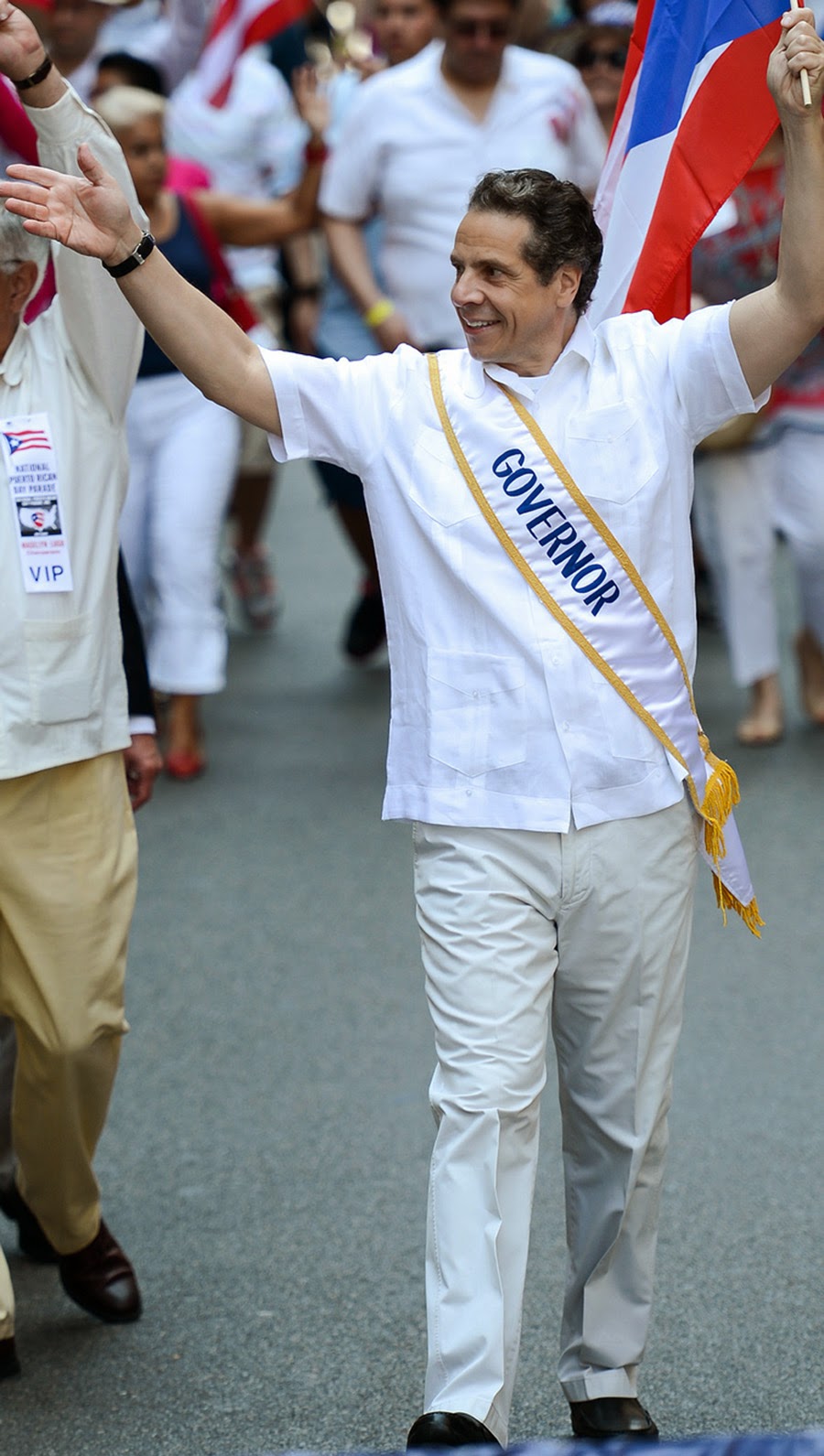 At a recent presentation of his Inopportunity Agenda, New York Governor and department store dummy Andrew Cuomo welcomed Carl Heastie as the new speaker of the state assembly. Cuomo acknowledged that pastoral junkets will accompany the Bronx native's statewide position, proving once again that with great power comes a life of leisurely responsibility:

Before he even thinks about thwarting Cuomo’s perverse agenda—such as by saving public education or fumigating Albany—Heastie has been promised some fun in the sun with Cuomo. New Yorkers should rightly ask whether their governor or their paychecks will be funding the Summer of Carl.


Moreover, his overtures to Heastie exemplify once again Quid Pro Cuomo’s fetid philosophy of governance: everyone, including Carl Heastie, has a price.

As Heastie considers life on the Cuomo side, middle-class New Yorkers are riding a rapid toward the mouth of a Montauk shark, with members of the White Pants Club lining the shore, pointing and laughing.

Cuomo is a proud member of this club.

And as long as people like Heastie will fit in his pockets, Cuomo will continue to wear the pants.

Posted by sullio at 7:41 PM No comments:

NYSUT Must Spit Up Cuomo’s Baloney

While Cuomo’s APPR did indeed taste like baloney four years ago, instead of steak, the Lobbyist for the Students now wants to feed public education raw sewage, mixing everything from tax breaks for the rich to broken due process rights into his fetid stew.

As if his proposals weren’t shitty enough, Cuomo is also holding taxpayer dollars hostage to them. Already neutered by his Gap Elimination Adjustment and undemocratic tax cap, schools will receive a measly $1.1 billion if and only if they grant the state (i.e. Cuomo) the power to fire as many middle-class workers as possible. Cuomo seeks to kick districts in the face after kicking them between the legs.
With New York State United Teachers (NYSUT) finally out of the picture, Cuomo’s campaign donors can swarm the schools, subsume policies, and further segregate our kids.
It is an understatement to call what Cuomo is proposing the “end of local control”; he is telling public education—the bulwark of democracy—to get lost.

So as not to limp quietly into the graveyard of civilization, both public education and NYSUT must appeal to the people—democracy’s saving grace.

In forums last year throughout the state, for example, thousands of teachers and parents came together and irrefutably indicted the Common Core Standards and their accompanying high-stakes tests. Parents and educators cried into microphones while Regents Chancellor Merryl Tisch cried into her vodka.

As protests against abusive state tests multiplied, Cuomo himself at one point bizarrely announced he was ready to pick up a placard and join the uprising. The same tests he once demanded makeup 20% of his teacher evaluation law had caused—according to Cuomo—“massive confusion, massive anxiety, and massive chaos.”   With his latest proposal cementing at least 50% of a teacher’s job to state tests, Cuomo apparently wants 30% more confusion, anxiety, and chaos to run riot throughout the state.

If Cuomo thought the backlash against Common Core last year was chaotic, he needs to step out of his mansion more often.

Nothing inflames democracy more than a douchebag doing the bidding of Big Business, and communities around New York are catching onto Cuomo and his baloney tests, so much so that a record number of students are expected to refuse to take them again this year. With some teachers even refusing to proctor the tests, the message is clear: Cuomo and his donors will need to find another way to burrow beneath public education.

NYSUT must mobilize around the I Refuse movement, allowing democracy, not Cuomo, to rule our schools.

No parent, teacher, or cafeteria worker should serve our children Cuomo’s putrid slop.