"Thank you very much. What a pleasure, what a treat. First, to Michael Mulgrew, who is head of the teachers union statewide, who does an amazing job. Why? Because he really believes in what he's doing."

Mulgrew said he's enjoyed his time as President of the United Federation of Teachers (UFT) and will stay on until a suitable slug replacement is found.

In the meantime, NYSUT members should prepare themselves for more giant check photo ops with Cuomo, and .03% of teachers will even win a $5,000 stipend for PD classes from the Lobbyist for the Students. Nevermind your tenure and pension; they aren't as important as Cuomo's political career.

And those pondering the legality of Mulgrew's promotion should stop right there. For an obscure clause in the NYSUT Constitution states that any NYSUT member who has lunch with the governor as often as Mulgrew shall be president by default.

NYSUT's battles are now Mulgrew's battles, and its motto in 2017 and beyond will be "victory" assuming the state's constitution is rewritten to steal collective bargaining rights and pensions.

Cuomo also thanked NYSUT for its generous contributions to the New York Democrats, his political slush fund. With the help of Mulgrew and even more delicious lunches, Cuomo just wants to say "I love you" to teachers before he screws them over--once again.

Update: Predictably, reaction to this story was swift and skeptical, prompting Cuomo to reaffirm Mulgrew's promotion at yet another giant check photo op, this time at an elementary school in Brooklyn:


First, to the gentleman who you just heard speak. His name is Michael Mulgrew. He is in charge of all the teachers all across the state of New York, and he is a great champion for them, and he works night and day, and he does a fantastic job, so let's give him a big round of applause and a big cheer, he should get a big cheer, Michael, give Michael a big cheer.

Governor Andy fully intends to bask in even more cheers for Mulgrew in the months to come. After all, it's much nicer than answering questions about why Cuomo, the founder of the Women's Equality Party, decided to throw NYSUT's first female president under the Tampax Express.

At press time, Magee has yet to comment, and is apparently now pretending to be the president of NYSUT. 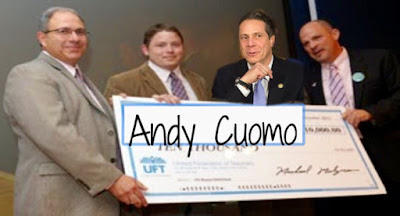 Straining to burnish his Union bonafides, New York Governor Andy Cuomo recently appeared at the Manhattan headquarters of the United Federation of Teachers (UFT). Cuomo surfaced not in support of school teachers, however, but firefighters, who rightly received a rise in benefits with the stroke of a state-funded pen.

Ironically, while claiming to care about workers, Cuomo cares nothing about working teachers. It seems Cuomo wants to knock teachers out of the middle class so he doesn't have to fight for them.

And it is an assault on decency that the UFT would even allow the Lobbyist for the Students within a block of Union headquarters--let alone inside--proclaiming himself a champion of justice for workers. In case the UFT has forgotten, Cuomo's idea of "justice" includes closing public schools and firing teachers due to destitute and dysfunctional families (otherwise known as low test scores).

Cuomo would also like to see teachers and their pensions disappear, signing his name to Tier VI and Tweets like this: 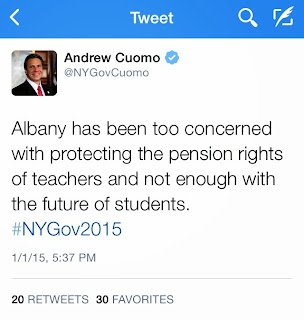 Evidently, justice ends where Cuomo's enemies list begins. Those who dedicate their lives to children will dedicate their appetites to cat food in retirement if Cuomo has anything to do with it.

Furthermore, a looming 2017 constitutional convention ballot initiative would give Cuomo and his slimy associates the chance to finally enshrine laws that screw anyone who's been mean to Governor Andy, like teachers. A revised New York Constitution might exclude those pesky public pensions once and for all, for example, and Cuomo can do to collective bargaining rights in New York what his brother-from-another-mother Scott Walker did to them in Wisconsin.

Helping one group of workers while punishing another is not fairness, but moral malfeasance, and cruelty cancels any kindness. The UFT should remember this the next time they open their doors to a man who's harmed their profession more than any politician in state history.
Posted by sullio at 9:42 AM 1 comment: