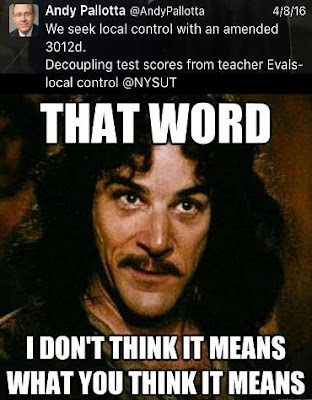 As things go, the 1998 film The Siege is remarkably prescient. Terrorist bombs and bullets bombard Manhattan as New York FBI agent Anthony Hubbard (Denzel Washington) gives way to the maniacal whims of President Trump U.S. Army Major General William Devereaux (Bruce Willis). Muslim males are concentrated into camps around the city and Hubbard must take his investigation underground--both to evade Devereaux's homicidal scrutiny and because his headquarters is blown up at the beginning of the movie.

It's Hubbard's apparent ineptitude at stopping the terrorists which draws the ire of the feds in the first place, and he must find a way around the government's ignorant interventions to save his city.

Lest anyone label this the stuff of hyperbole, it is marching across New York State today.

Albany, for instance, has developed a bizarre love-hate relationship with public education, promising to increase funding if--and only if--schools agree to implement Governor Sociopath Cuomo's latest teacher evaluation law (3012-d). Among other absurdities, Cuomo's plan counts standardized tests as 50% of a teacher's overall score, and includes a student "growth formula" that even Education Commissioner MaryEllen Elia has called "random." Add to this number classroom observations performed by people who will need a GPS to find your child's school.

In other words, public education is careening toward a place where bureaucrats like Cuomo only allow it to exist on their terms instead of the terms of local communities. Firing teachers and closing "failing" schools will only increase unless people shut up, take the Tests, and admit, "It is what is."

Sadly, NYSUT's promise to "seek" local control is closer to fiction than The Siege. The Union has voiced tepid opposition to Cuomo's attempts to trample workers' rights and test kids into conformity. Tortured Tweets aside, Executive Vice President Andy Pallotta conspicuously excluded references to 3012-d in his annual address to the state legislature, but can't wait to tell you how great Hillary Clinton is.

In addition, UFT President Michael Mulgrew, who controls some 800 delegates to NYSUT's annual representative assembly and thus essentially controls how the Union votes --shamelessly proclaimed that a teacher's job should ride on test scores because principals cannot be trusted to do their jobs. It seems Mulgrew likes his chances with the demons of junk science more than the better angels of humanity. Paradoxically, Mulgrew also tried to take credit for Cuomo's meaningless "moratorium" on test-and-punish, and even placed a pricey ad that touted the UFT's bogus victory.

Any progress against the privatization of public education in New York, however, is thanks to thousands of prudent parents who've refused to expose their children to Cuomo's toxic tests. Unfortunately, Mulgrew's litany of lunches with the Lobbyist for the Students--access which no other NYSUT president knows--has only spread dysentery to schools throughout the state, as they must take another bite out of Cuomo's shit sandwich or starve to death--whichever comes first.
NYSUT members outside of the UFT who dare question Mulgrew's malfeasance are accused of violating the "autonomy" of the Union's largest local. After all, there's a UFT election coming up, and teachers from Gloversville to Hicksville should just stay out of it; it's not like Mulgrew's autonomy has ever allowed him to fuck things up for the rest of the state.

But what say defenders of the UFT's recent $100,000 donation to a man named Ted O'Brien, a failed candidate for the state senate in the Rochester area, some 350 miles beyond the UFT's autonomy? The donation was allegedly part of an asinine scheme by New York City Mayor Bill DeBlasio to raise money for distant Democrats. Is meddling in corrupt state elections less offensive than meddling in union elections?
Should UFT members think twice before funding the futile campaigns of candidates who live closer to Canada than Corona? Do UFT members even know what their money is being spent on? Maybe the U.S. attorney can clear this up.

Like a child needs a family, public education needs local control. The more control that schools surrender to ambitious idiots (i.e. New York politicians), the deeper our divisions delve. As we enter the Idiocracy, we must not let idiots divide us.

Rather, parents, teachers, and students must tell the likes of Cuomo and Mulgrew that their authority ends now.

Give our schools liberty, or give them insolvency.