NYSUT in Need of Help! for the Heavy Hearts Club

The Union needs lots of dough to help re-elect those who recently enabled Governor Andy (Andrew) Cuomo's maniacal quest to destroy public education. That's right, NYSUT is asking members to contribute whatever they can to people who swallowed the following poison pills tucked into Cuomo's 2015 state budget, otherwise known as the Education Transformation Act:


Do these laws sound beneficial to the lives and livelihoods of teachers? Didn't think so. Yet the teachers union now wants to use money voluntarily contributed by members (VOTE-COPE) to support the re-election campaigns of many of the same legislators who last year said their "heavy heart" couldn't even stop them from supporting these laws.

(In fairness, however, some legislators said it never felt better saying "yes" to something in the middle of the night.)

Who are the politicians NYSUT wants teachers to dedicate their time and money to until and even after Election Day?

Via Google, The Pen is Mightier than the Person was able to unearth the list of NYSUT-approved legislators who helped enact the Education Transformation Act: 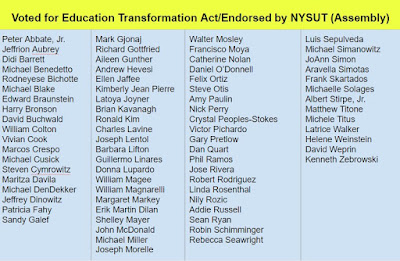 NYSUT will call these people "champions" of public education, but champions are crowned for words and actions. And since 2015, the Heavy Hearts Club has relied on carefully-worded excuses for their legislative impotence. With the notable exception of Senator Todd Kaminsky, who recently proposed laws to incinerate much of Cuomo's garbage, the legislature would rather pass laws that condone gambling and drinking vodka at 10 AM.

If each and every NYSUT-approved legislator listed above supported Kaminsky's bills in words and deeds, NYSUT's request for VOTE-COPE contributions would speak for itself. Instead, NYSUT wants more money for people who only talk about supporting public education. When it comes time to act, these legislators have either been sleeping or sharpening their shivs.

And don't buy the tired retort of "voted for record funding" whenever these legislators are challenged, for funding is not what it appears to be with a draconian tax cap in place, after all. And who even wants funding that will primarily be used to destroy public education?

A Trojan Horse constructed of cash is rolling across the state, and taxpayers will soon be paying more money for inferior schools, something Cuomo and others have always ironically used to justify their attacks on schools. Is it any wonder why Cuomo recently said, for instance, that "We spend more money per student than any other state in the United States of America, and I'm proud of it"?  Cuomo can at last be proud of public education since it's now covered in his slimy fingerprints.

So what's a working teacher to do in an election year that's been a blinding assault on intelligence?

With seemingly no reason to support most candidates, what next?

Stop caring about politics altogether and surrender to the charter school interests?

Support the lesser of many evils?

Though teachers should be smart enough to answer these questions on their own, a key cause of this mess is that not enough teachers have cared to even consider these questions, ceding all political passion and opinions to leaders desperate to keep their seats at the proverbial table. Like tandem tumors, cynicism and apathy run riot as teachers "just want to shut the door and teach" and ignore the privatizers lurking beyond their classroom walls.

To determine whether the Heavy Hearts are truly their friends--and truly deserve their help--teachers should ask them one question only:

Now that you've broken public education, what are you going to do to fix it?

Their answers should be worth about as much as your contributions to their campaigns.

Posted by sullio at 8:52 AM No comments:

Stronger Together, We Opt-Out 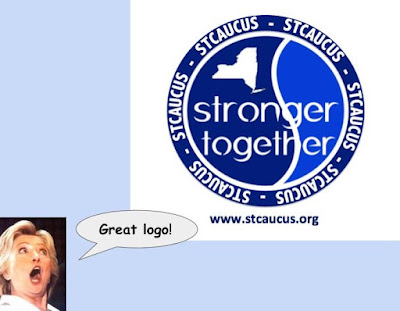 A recent Friday news dump by the New York State Education Department (NYSED) reported that more than 20% of public school parents are still refusing to subject their children to grades 3-8 standardized tests. You don't need Bill Gates to tell you how much thousands of blank answer sheets threaten a test's validity. This number does not even include those kids who finished the test in five minutes because their friends opted-out. Pencils without erasers worked just fine.

It seems the "toolkit" distributed by the state to combat opt-outs contained only pulled nails and sawdust.

Standardized tests also line the litter box of a teacher evaluation law (APPR) that was recently declared "arbitrary and capricious" by a state judge. Not to worry--in the newest, slimiest version of Governor Andy Cuomo's putrid law, tests will count even more. The thinking is that our kids will be much readier for community colleges and careers if we make it easier to fire their teachers. Paradoxically, with less job security than a blind barber, the one profession the Lobbyist for the Student's legislation will not prepare our kids for is teaching.

In his proposed regulations to the Every Student Succeeds Act (ESSA), U.S. Secretary of Education John "It's good to be the" King now seeks to smother opt-outs and tamp down an unprecedented act of civil disobedience. As education commissioner in New York, King only fed people's worst fears about the tests, callously implementing a system meant to close schools and shuffle students. Former New York City Mayor and aspiring horse jockey Michael Bloomberg recently noted that New Yorkers "know a con" when they see one, and the bullshit meter broke soon after King started spewing his dissonant hopes and dreams for kids.

Now King's act has gone national and he wants to punish even more schools for refusing the tests. Schools from Dover to Denver must come up with plans to deal with opt-outs, and the plans must be expensive and time-consuming. Because if there's anything public education needs, it's more mandates from distant dickheads who couldn't teach their way out of a wet paper bag.

If and when King's resolutions come to pass, his bluff must be vehemently called. For the federal government denying local resources all because of standardized tests goes against decency, democracy, and likely the Constitution itself.

And now is not the time for the leaders of New York State United Teachers (NYSUT) to bend over and say "we told you so" to members. Although their favorite presidential candidate Hillary Clinton called this a "war" which we "don't have time for", as long as the rights of students and teachers continue to diminish, a truce will not be at hand. Perhaps Hillary will appoint people who believe in a local community's ability to control who teaches their kids. Or perhaps not. We might have to elect her to find out, as Democratic Party insiders consider Common Core a "political third rail", while Hillary once bizarrely referred to public education as a "non-family enterprise."

At the conclusion of the 1995 film Braveheart, the hero William Wallace is dead and jaded Scottish rebels have lost all will to fight. To the exasperation of many, however, and at the pleading of Robert the Bruce, the Scots quickly bounce back and continue their war against England, realizing they've won nothing. Dispirited and disenfranchised Americans must carry the same spirit today, and cannot drown in complacency and despair. Greedy demagogues are indeed waging war against our schools, and will stop at nothing until students and teachers are assessed into oblivion.