Don't be Fooled by Cuomo's Mea Culpa on Testing

As New York Governor Andrew Cuomo pretends to listen to parents and teachers, he hopes they don't know how to read.

Buried at the bottom of a recent press release announcing the "recommendations" of his education task farce is proof that Cuomo is open to changing nothing:


The Education Transformation Act of 2015 will remain in place, and no new legislation is required to implement the recommendations of the report, including recommendations regarding the transition period for consequences for students and teachers. During the transition, the 18 percent of teachers whose performance is measured, in part, by Common Core tests will use different local measures approved by the state, similar to the measures already being used by the majority of teachers.

Yes, tests will still count for 50% of a teacher's evaluation.

The so-called “local measures" will require the state’s seal of approval, and the cut-points on the convoluted “matrix” that determines if teachers keep their jobs will be tweaked just enough so heads roll—regardless of how “fair” the tests appear. Moreover, the number of tests will double as students will take one test to grade their teachers, and one test that will, according to Cuomo, be "meaningless" until the 2019-2020 school year. So much for reducing the amount of testing.


School districts can now expect a full-court press by Cuomo and his slimy associates to convince them to agree to his asinine teacher evaluation law (APPR) or lose more funding. After all, the (Common Core) tests won't count for another four years, even though communities and careers will still depend on tests.

Additionally, everything else in the Lobbyist for the Student's infamous Education Transformation Act remains, including receivership and weakened due process rights. As Cuomo maintains, the law will not change. The test is still king.


Though federal law now says states don't have to use test scores to rate teachers, Cuomo doesn't care. He will use any means necessary to break public education and hand the pieces over to his Wall Street donors. Cuomo is too greedy and prideful to try to save face.

Education historian Diane Ravitch recently wondered why Cuomo thinks he can control education since the New York State Constitution grants that power to the Board of Regents, not the governor. Cuomo gets control by linking ludicrous laws to budgets which are rammed though in the middle of the night. As he once said, he is the government, and public education and all of its democracy threatens Cuomo's control.

It's time for spineless, heavy-hearted legislators to take control away from Cuomo and ram through legislation on behalf of the communities they claim to represent.

Nothing short of a complete rebuke of Cuomo's toxic agenda will stop 500,000 test refusals now. 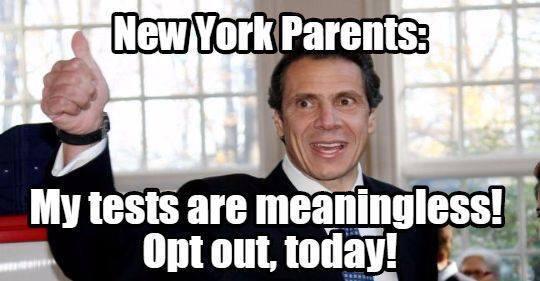