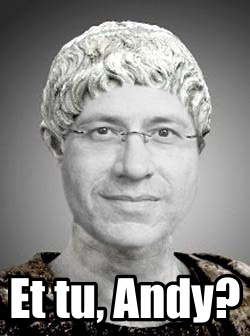 The political winds aren't brisk enough so let's throw a NYSUT election into the mix.

Come April 8, current NYSUT president Karen Magee will either be out of a job or preparing to run the union into the ground for another three years.

Magee's two challengers are in it for the wrong and right reasons, respectively.

First for the wrong. Although he teamed up with her on the sham successful Revive NYSUT slate in 2014, current NYSUT Executive Vice President and semi-regular reader of this blog Andrew "Andy" Pallotta is now trying to throw Magee under the same bus that ran over her predecessor, Dick Iannuzzi.

The problem is that Pallotta has been driving the bus both times.

Evidently, Pallotta is finally serious about reviving NYSUT, and thinks he's got what it takes to lead public education to the promised land. His eight-year record as a NYSUT officer, however, belies any serious hope that Pallotta can help pull schools back from the brink.

As NYSUT Executive Vice President, Pallotta's main charge has been to lobby legislators on behalf of working teachers, and at least earn a legitimate victory every once and a while.

Since 2009, however, New York teachers have faced loss after loss, with Governor Andy Cuomo and the state legislator callously attacking teacher pensions and due process rights while spewing Common Core tests across the state. Thanks to Cuomo's Education Transformation Act, for example, trumped-up charges are now all it takes to fire tenured teachers and hand their schools off to voucher school villains. Meanwhile, suburban and rural districts are pinned-down by an insolvency-inducing tax cap, while urban schools are flush with rats instead of cash.

But it's not like Pallotta hasn't tried. In fact, just last year he spent $109,600 (the maximum amount) of voluntary member donations (VOTE-COPE) on Republicans in the New York Senate, whose leader - John Flanagan - recently pledged allegiance to Betsy DeVos, President Trump's toxic secretary of education. It's safe to say that whatever campaign cash Flanagan and his flunkies received from NYSUT was spent on obliterating any compassion they had left for public education - the platform of American democracy.

Speaking of President Trump, Pallotta is a former member of the United Federation of Teachers (UFT), which recently took the absurd action of striking any references to Trump from a union resolution, opting to refer to Trump only as "the presidential election." Pallotta's pals in the UFT were apparently too afraid to offend public school teachers who voted for Trump, otherwise known as Those Who Should Know Better.

And it's this kind of kowtowing that's placed teachers and their unions exactly where they are today - begging for scraps at the laps of people whose names they won't even whisper.

This is America, and our freedoms should include permission to criticize our leaders. Any educator who delays speaking truth to power is only running toward the inevitable cries of "Would've, could've, should've!" as their careers careen into flames.

Magee's second challenger, on the other hand, is not afraid to say Donald Trump's name. A high School physics teacher and current President of the Lakeland Federation of Teachers (LFT), Mike Lillis has experience which Andy Pallotta severely lacks - running a classroom while running a union in the dark age of school deform. Lillis also has a good-old fashioned obsession with facts and data, which he has used to help unravel and reveal the fleecing of public education.

The attacks on schools can be boiled down to one number - 1630 - which equals the average score New York State expects students to achieve on the SAT. Only 34% of students who take the SAT, however, achieve this score, and your third-grader will not be one of them unless she scores a 3 on tests Cuomo himself once called "meaningless." Subpar students naturally means subpar teachers, whose subpar schools will soon be transformed into subpar websites.

In a world of alternative facts, 1630 is an indisputable digit which represents all that is wrong with school deform.

Sadly, when Lillis brought this bogus benchmark before the New York State Education Department (NYSED) and Commissioner MaryEllen Elia, crickets filled the room. After all, everyone had always assumed that "college and career ready" meant whatever Bill Gates wanted it to mean, and did not originate from say, some arbitrary test score. NYSED promised to "get back to" Lillis with an explanation, and he's still waiting. Lillis did get the Commissioner to admit that the teacher evaluation system was "random", however, a both hilarious and horrifying admission from the state's top education official.

Joining Lillis on the ST slate of candidates are Bianca Tanis, who's running for Pallotta's old position, Megan DeLaRosa (1st Vice President), and Nate Hathaway (Secretary/Treasurer). Like Lillis, all of them are full-time teachers and unionists, and all of them care deeply about their profession, on personal and professional levels.


All of them are also leaders of the opt-out movement, an unprecedented act of civil disobedience which has pushed back against the privatization of public education. As a founder of New York State Allies for Public Education (NYSAPE), Bianca Tanis has traveled the state and appeared on national television to educate teachers and parents on the standardized threats their schools face. This dedication alone has given working teachers more hope than Andy Pallotta could ever hope to give.

Even amid the lunacy of a Trump presidency, the existential threats faced by NYSUT and teachers in general cannot be minimized. This election should at least help expose those threats to a public flogging of logic and the altruism of educators.

Lillis and ST recognize these threats, and want schools to persevere and prosper. They know, for instance, that the eager students sitting in their classrooms today are a lot less likely to become teachers tomorrow because of the losses of the past decade, losses which the likes of Pallotta have done little to stop.

With all three branches of government ready to turn America into a Right to Work nation, it's finally time for NYSUT to get serious and give grassroots teachers a chance to lead. Besides, there's little to stop NYSUT from sliding off the cliff once dues becomes optional, and your leader will be the guy who brought you Tier VI and four-year tenure.

Mike Lillis and the ST slate will fight for fairness, for all teachers and students. They understand the importance of the Union movement and do not enjoy seeing it decimated by apathy and ignorance.

Whether it's ST, the UFT, or NYSUT, the Union must endure - it is the only barrier keeping us from the billionaire barbarians.

We must hold the line and move forward, together.